Women march for justice and demand respect at work 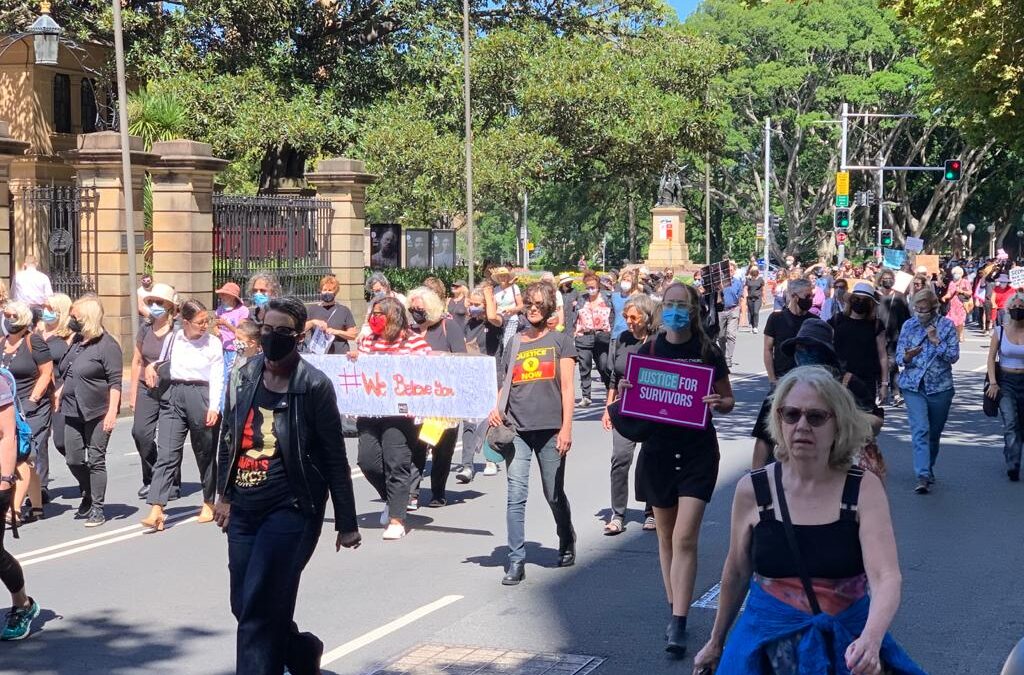 Today we marched. Today we raised our voices and we yelled, unapologetically. Today we united and screamed, enough is enough. Today we demanded safe workplaces where those who perpetrate gendered violence are held accountable and survivors are believed and supported.

We demand that our leaders do not call victims ‘lying cows’ or require their female partner to explain basic human empathy. We deserve better. Society demands better. We all NEED better.

Mike Carlton tweeted today ‘I have a feeling that today’s marches will be a historic turning point. That they will have a changed Australia by sundown’.

Women, and our allies, are angry. I am angry. It’s no longer a simmering discontent. A low flame of knowing equality is not our reality. There is a collective, loud and unstoppable rage as women and their allies descend both on Canberra and in marches across the country.

After weeks of truly disturbing, terrifying and frankly disgusting news of what happens to women in politics, women have united and agreed to no longer be silent about workplace harassment. This march is demanding change and a commitment from our Government to take decisive action against gendered violence in Parliament and all workplaces. It is about changing harmful attitudes and behaviours. It is about standing with and for survivors of gendered violence, in workplaces and everywhere.

If you ever needed to ask yourself ‘should I say something?’ – something is wrong.

Some powerful quotes from today:

Secretary of the Australian Council of Trade Unions, Sally McManus spoke in Canberra:

“I do believe we’ve been called a mob. What we want is simple. We want a stop to rape, to stop murder. We are not faceless. We are the majority. Anger combined with unity, direction and purpose, it brings change.”

Saxon Mullins, the complainant in the rape trial of Luke Lazarus, who pushed for the NSW state government to commission a review of sexual consent laws, said from the stage:

Do you laugh at sexist jokes? Do you think you could outrun Cathy Freeman? Do you look the other way when your mate yells at his girlfriend on a night out? Do you tell people they are being too sensitive when they call out sexist, racist or transphobic remarks …

If any of this rings a bell I need to remind you … you helped create a toxic culture of misogyny.”

Former MP Julia Banks has addressed the crowd in Melbourne. She said she was initially scared to speak today for fear of repercussions.

Banks said federal parliament is “dominated by men in power”.

“But there’s something more powerful than the people who hold power. It’s this, it’s the people.”

Enough with the internal reviews, that stay internal to the big boys in power who do nothing with them except hide them…

If your workplace is not safe, harassment-free, gender-equal and inclusive…

If your workplace leaders are not transparent, accountable and proactive…

If you feel scared and silenced….

Every person deserves to be safe and respected in their workplace.

If you need an advocate, the WiS steering committee is here for you.

Our founder, lawyer Amanda Farmer, says: “It is both the calling and the duty of those of us who have a voice, who have the confidence or expertise, who hold a privileged seat at the table, to stand, speak and fight for those who do not, or cannot.”

With complete confidentiality, we will help you.

It’s a day of change. An important day to protect women. To hold those who do the wrong thing accountable. To move towards a mutual respect.

Sign the petition. Demand the justice we deserve. Raise your voices. Be heard.